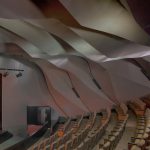 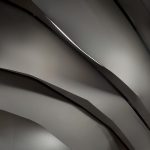 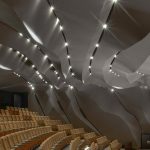 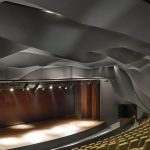 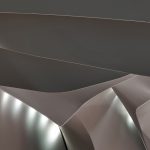 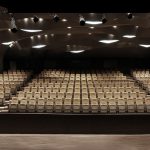 A sculptural, undulating space evoking the landscape of Sharjah, transforms an existing office building into a cultural destination. The elastic fabric membrane conceals a matrix of theatrical equipment and individual, computer machined members. The consistent rippling surface creates a dramatic, immersive environment unlike anything else in the world.

When asked to create a theatre rooted both in the nature and history of the Emirate of Sharjah, and embodying its expanding cultural future; we designed a theatre renovation based on a subtle atmospheric amalgamation of traditional daily life from the past and the contemporary world of theatre. In the days of nomadic life, news was transmitted through oral narrative under the sky amidst the nocturnal desert landscape. The design of the Al Qasba auditorium draws inspiration from the nature of Sharjah and suggests an inverted, fully enclosing scenographic landscape. Lights hidden within the fold lines scatter across the ceiling evoking images of the evening sun striking the sand dunes. Visitors entering the auditorium are removed from their daily, and immersed into the awe inspiring, serrated space, encapsulating the performances within in the new Masrah Al Qasba Theatre.

Past and present are mirrored in the material rendition for the project. The interior skin is created out of a sophisticated textile, the evolution of the traditional building materials of the region. The textile wraps the walls and ceiling of the 300 seat auditorium space in a continuous, homogeneous surface. Lights at the fold lines gently accentuate the walls’ double curvature. By placing the lights on the inclined ceiling surfaces directed towards the stage, the auditorium lights provide ample illumination while remain invisible from the audience seats. Additional spotlights installed behind the surface can be moderated to create a soft, dimmed illumination for lectures and talks.

The Al Qasba is the center of entertainment, cultural and tourism within the Emirate of Sharjah. Two 150 m long, four storey high buildings face each other on the banks of the Al Qasba Canal. They host an assortment of art galleries, shops, restaurants, business centres, meeting halls and offices, flanking the Etisalat Ferris wheel to the North. The Masrah Al Qasba Theater is the venue of cultural and entertainment events like the annual Sharjah film festival.